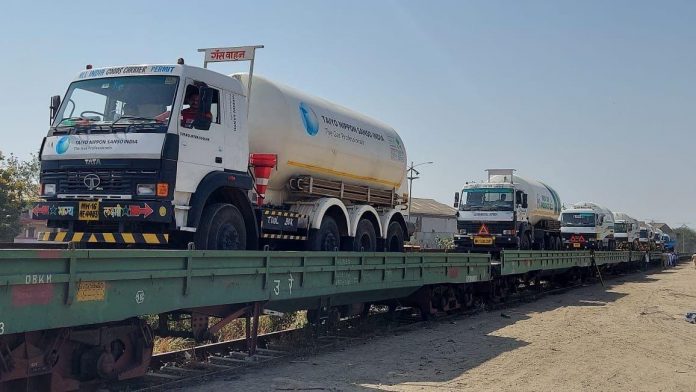 More Trains in the pipeline

Indian Railway is running Oxygen Express in response to its fight against Covid-19.

Oxygen Expresses with Liquid Medical Oxygen(LMO) tankers have arrived at Nashik & at Lucknow for Maharashtra and Uttar Pradesh respectively.

Few Containers were also unloaded at Nagpur and Varanasi enroute to supply LMO in these region. Also, third Oxygen Express started its journey from Lucknow this morning.

States like Andhra Pradesh, Delhi are in consultation with Railways to run more such trains.

It may be noted that tankers filled with LMO at Visakhapatnam & Bokaro are presently being transported through Ro-Ro service of Indian Railways.

To fulfil the requirements of Medical Oxygen in Uttar Pradesh, for the movement of the train, a green corridor was created between Lucknow to Varanasi. The distance of 270 Km was covered by the train in 4 hours 20 minutes with an average speed of 62.35 kmph.

A total of 10 containers having nearly 150 tonnes of Oxygen have been carried so far.

Transportation of Oxygen through Trains is faster over long distances than road transport. Trains run 24×7 unlike road transports.

Indian Railways transported essential commodities and kept the supply chain intact even during the lockdown last year and continue to serve the Nation in times of emergencies.

SourcePIB
Facebook
Twitter
WhatsApp
Email
Telegram
Previous articleCentre identifies 9,732 compliances to be tweaked or erased, states too likely to scrap archaic laws
Next articleArvind & Uddhav are not only Delhi & Mumbai’s blunder but nation will pay for their mistake: Abhijeet Sinha