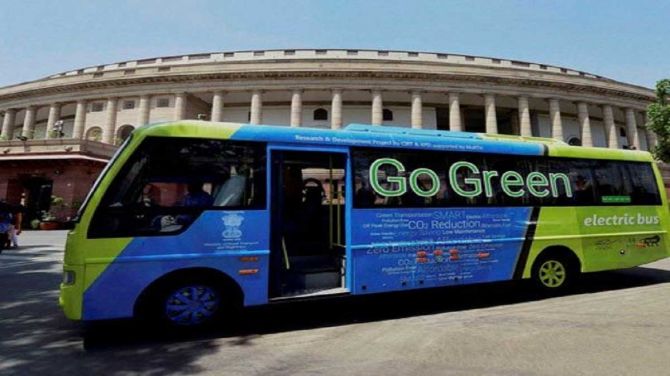 NITI Aayog plans to consolidate with more states to procure electric two-wheelers and three-wheelers by pushing the use of this procurement platform.

The recently concluded procurement of 5,450 electric buses — the largest so far in India — is set to change the way state transport authorities operate buses.

The Centre’s policy think tank, NITI Aayog, brought these cities/states and all stakeholders on a common procurement portal, which harmonised standards and specifications for the procurement that helped in aggregating demand.

Moving away from the “inefficient” own-and-operate model, city governments decided to “procure, maintain and run” buses over a 12-year period by charging the discovered price of per-kilometre operations.

Electricity cost, and fuel of these buses, were bundled into the bid price.

State governments will be responsible for handling of depots and electricity connection to the operators.

This helped in discovering lowest price to run such buses, making them 15-20 per cent cheaper than combustion buses.

The procurement allows state agencies to purchase mobility as a service (MaaS) and operators are paid a fixed price in rupees per kilometre over a period of time.

The initiative is an example of power of aggregation of demand, said Amitabh Kant, chief executive officer (CEO) at NITI Aayog.

“This demonstrates that when India uses its size and scale to procure goods through cutting-edge technology, prices fall radically,” Kant told Business Standard.

Getting states together on the same page for procurement of this size was a result of marathon meetings, but now it reflects India’s cooperative federalism as advocated by Prime Minister Narendra Modi, Kant said.

The drafting of the tender document for the procurement, and shaping of the business model was done by NITI Aayog through its National Mission on Transformative Mobility and Battery Storage.

It was made attractive by including a term of 12 years, with assured kilometre of 10 lakh per bus, along with a credible payment security system that encouraged robust participation and aggressive bidding.

Tata Motors had emerged as the lowest bidder for the tender in the auction that concluded last month.

These prices will set a benchmark for public transport, which will now encourage other cities to adopt electric vehicles.

This is bound to redefine a new way of mobility for Indian cities, making deployment of e-buses at an affordable rate, Kant said.

The Faster Adoption and Manufacturing of Hybrid and Electric vehicles (FAME-II) scheme has helped bring down prices as it provides capital subsidy of up to Rs 55 lakh per electric bus, narrowing the cost differential with traditional diesel/CNG buses.

“The fall in prices of electric buses is path-breaking, the same was earlier done for LEDs,” Kant said.

NITI Aayog plans to consolidate with more states to procure electric two-wheelers and three-wheelers by pushing the use of this procurement platform, he added.

The wider adoption of electric vehicles will help India in meeting its climate change goals announced in COP-26, Kant said.