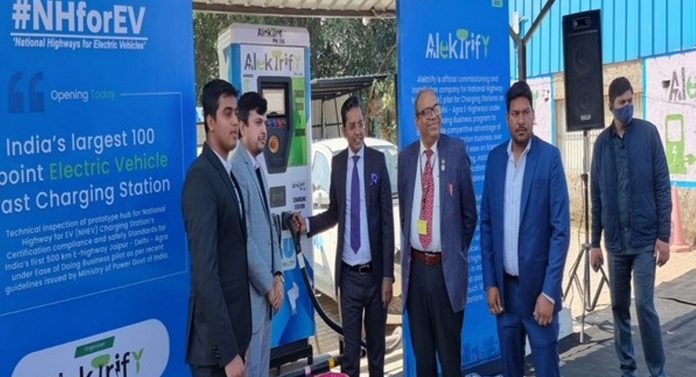 India’s largest electric vehicle (EV) charging station, with 100 charging points for four-wheelers, was commissioned in Sector 52 here on Friday. Before this, the country’s largest EV charging station was in Navi Mumbai, with 16 AC and 4 DC charging ports for such vehicles.

The EV charging station in Gurugram, with 72 AC slow-chargers and 24 DC fast-chargers, has been installed and is operated by a partner company of National Highways for Electric Vehicle (NHEV), as part of a pilot project to install charging stations on the Delhi-Jaipur and Delhi-Agra highways, and turn them into e-highways.

The pilot project is aimed at demonstrating the competitive advantage of owning a charging station business over petrol pumps, in terms of ease in getting the necessary licensing, designing, commissioning, installation, electrification and safety certifications.

Future of transport
Abhijeet Sinha, Project Director, NHEV, said that the electric vehicles were the future of transport, in preparation for which this station had been built as a prototype.

Sudhendu J. Sinha, Adviser (Infrastructure, Connectivity – Transport and Electric Mobility), NITI Aayog, said that India was committed towards its fight against environmental degradation and in achieving carbon neutrality by 2070. He added that electric vehicles would help India significantly in achieving those targets.