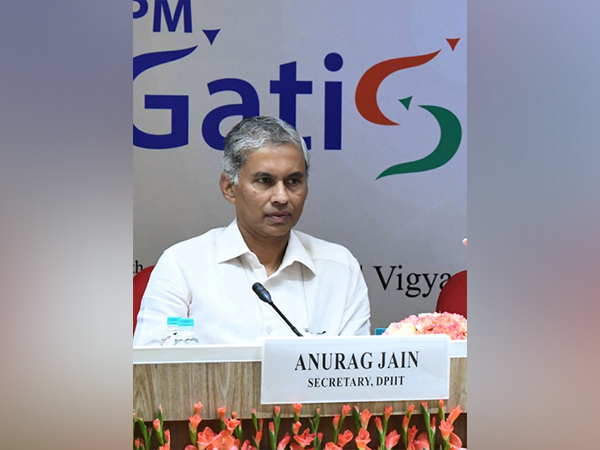 New Delhi [India], October 14 (ANI): Department for Promotion of Industry and Internal Trade Secretary Anurag Jain said PM Gati Shakti – National Master Plan for multi-modal connectivity had been launched which is a digital platform to bring 16 ministries , including railways and roadways together for integrated planning and coordinated implementation of infrastructure connectivity projects.

At the opening and plenary session of the national conference on MNCs 2022, organised by the Confederation of Indian Industry (CII) on 14 October 2022 in New Delhi, the secretary said the multi-modal connectivity would provide integrated and seamless connectivity for the movement of human capital, goods, and services from one mode of transport to another. It would facilitate the last-mile connectivity of infrastructure and also reduce travel-time, he said.

The secretary said India has one of the most robust FDI policies. “We are currently moving towards Phase 2 of the National Single Window System which is focused on new investments and for existing businesses, it will be a single window process.”

“We want to create a single ID (identity) which will be the PAN to make it a seamless experience by December 2023. We are committed to enhance EoDB (ease of doing business) ) all across India for the industry and MNCs,” the secretary added.

Anurag Jain also launched the CII – EY Report on Vision ‘Developed India’ – Opportunities and Challenges for MNCs during the session. The report elaborated on several favourable factors indicating enhanced interest of MNCs in the Indian economy. Seventy-one per cent of multinational corporations (MNCs) in the report mentioned that India would be a major part of the plans of their global expansion.

Ministry of Commerce & Industry DPIIT Additional Secretary Sumita Dawra remarked that India’s narrative of USD 3.5-trillion economy with a target to touch USD 30 trillion by 2047 offers many opportunities for MNCs. These include the initiatives such as National Infrastructure Pipeline, speeded FTAs (free trade agreements), national single window scheme, industrial townships with improved connectivity and logistics and the PLI scheme which has demonstrated strong success with production valued at USD 400 billion.

Sanjeev Sanyal, Member, Economic Advisory Council to the Prime Minister, stated that the government has introduced a plethora of reform measures aimed at achieving macroeconomic stability and easing the business climate such as implementation of goods and services tax (GST) and cleaning up of the banking system. He added that the focus was on supply-side reforms and greater degree of privatisation for efficient delivery of services.