Ease Of Doing Business And India’s Next Growth Phase 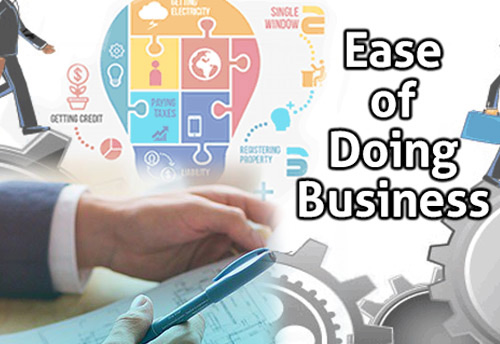 With ‘Ease of Doing Business, India offers new hope to the world in post-pandemic transition and this should encourage the industry to reach uncharted territories

Making a transition to the post-pandemic times, the world is facing the global strategic-economic fluctuations and the path of recovery is asymmetric across the frontiers. In the challenged world order where the nations should ideally be on finding the ways of economic rebounding, we hardly see such a pattern barring exceptions.

It is indeed heartening that India as the leading democracy and economy has proved to be one of the zones of hope to the world with its successful handling of an unprecedented crisis that came with the Covid-19 pandemic.

As a country, India’s success story on this count deserves to be lauded where the leadership from the top made it possible to minimize the losses and maximize the recovery potential. Consequently, it is evident that lives and livelihoods are getting back to the ‘old normal’ in India and the demand-side push is steering a very promising economic growth in short to medium terms.

The macroeconomic policies and timely reforms undertaken for improving the Ease of Doing Business (EoDB) have made it possible for the businesses to brave the challenges and contribute immensely to ‘India’s growth story’. EoDB is helping the economy and boosting the confidence of wealth-creators as the regulatory environment is increasingly getting sensitive to the needs of industry. This is such a blissful scenario and should be made a basis for next-level economic transformation.

India’s ranking on the World Bank’s Ease of Doing Business Index is part of its ‘Doing Business Report’ improved 14 notches to 63 (among 190 countries) in 2019. The government has drawn up an action plan to break into the top 50 and this seems imminent considering EoDB’s recognition in the policy circle as a key enabler of sustainable growth.

The mandate of making business simpler is an outcome of trickle-down, which happens through Prime Minister Narendra Modi’s unwavering commitment to reforms and making inclusive growth a key agenda of his government’s governance and economic planning framework. Since 2014, the economic reforms undertaken at the centre under the visionary leadership of our Prime Minister have been ‘game-changing’.

Indeed, many promised economic reforms made a way through in recent years. India has a Prime Minister who is on the mission of making the country achieve its true potential. Under his leadership, the government, industry and each Indian are working in unison to make it happen. At the cusp of decisive changes, the collective efforts will contribute most and decisively to Atmanirbhar Bharat. Each and every Indian should get the benefits of the nation’s progress.

While reflecting on India’s prominent position in world order with its outstanding socio-economic accomplishments, I have some encouraging figures to share.

As per an estimate by the International Monetary Fund (IMF), the 26 years have seen the Indian economy grow more than eightfold in dollar terms between 1992 and 2018. A USD 293 billion economy 26 years back is a USD 2.65 trillion one in 2018. Average incomes have also gone up by a factor of six over the same period—from USD 318 to USD 1,852.

At the cusp of decisive change, if the collaborative efforts of government and industry could continue with the same momentum or increased pace, the next 25 years will end with making India a USD 20 trillion economy or even richer where the average Indian citizen would earn USD 7,100 or more. As major policy traction, the Niti Aayog Action Plan to boost agriculture, as well as job creation in modern activities, is clearly in sync with what has happened over the past two-and-half decades.

In the year 2017, the Niti Aayog had set a balanced Action Plan for the next three years—with the ‘fair and square’ aim to provide sound strategic support for individual policies listed out in Action Plan. To create the roadmap for future progress, the Action Agenda attempts to cover nearly all aspects of the economy.

That is on track to attain the goals figured out with “Making New India,” keeping the constructive bearing with the government and industry, spearheading a campaign to transform the way India perceives governance and industrial development agenda.

The World Bank’s recognition of India as one of the top improvers on EoDB reassures the world about India’s relentless efforts for redefining the ways businesses operate in new times. Notwithstanding the issues facing the economies in the neighbourhood, India’s growth fundamentals are keeping South Asia on the world map as a region of progressive economic performance.

As a believer in peaceful coexistence Vasudhaiva Kutumbakam, India’s eminent position in South Asia and the world at large should inspire the other South Asian economies to have a collaborative approach.

This is an era where the performance far exceeds the expectations—and the government-industry collaboration reaching the next level, for scripting a new chapter of the Indian economy. So, India is already moving on the trajectory which will lead it further to the high and sustained economic growth, and that too, superlatively supported by equity and justice emanated through the grace of its remarkable democracy, positive attributes of federalism and success stories from states.

With the board indicators and imbibed in spirits, India’s policymaking ecosystem is headed to make EoDB, the topmost priority to consistently achieve India’s economic growth in double-digit and further democratised the benefits for Indians.

Today, the world is looking at India. India is reciprocating with its stellar capabilities on multiple fronts. Of late, such a process can be epoch-making as the businesses are increasingly in search of an alternative destination for diversifying and reaping the dividends. For obvious reasons, China is not offering the kind of hope expected by the world’s major businesses. India’s next phase of growth will be full of positive possibilities.

There Is Unprecedented Emphasis On Ease Of Doing Business And Living In India: PM

India Has Undertaken Many Reforms To Improve Ease Of Doing Business: PM