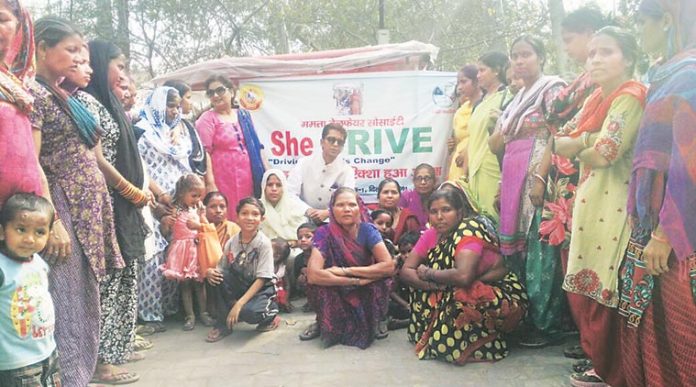 The women, all of whom will get pink e-rickshaws equipped with CCTV cameras and a set of uniforms, will have to pay Rs 200 per day for two years.

Dressed in a bright green sari with pink flowers, and with her three-year-old son in tow, Pushpa walks hurriedly towards Sanjay Jheel in east Delhi.

“My husband doesn’t like me going out much, but I convinced him to let me come out and learn this,” she says, while putting her foot on the brake of the e-rickshaw to avoid a sharp turn. Pushpa is one of the151 women who are learning to drive the battery-operated vehicle and become an e-rickshaw driver.

Pushpa and the other women are eagerly waiting for their own vehicle, which will be given to them by Prime Minister Narendra Modi under a loan scheme announced by the government.

“Now, I just have to prove to them that I can do this,” she announces, her eyes focused on the road as she looks to avoid another bump. The other women seated behind her laugh. Her story is familiar to them.

Sushma, who lives in the same neighbourhood as Pushpa, says, “The men in the colony have already started making fun of us. Seekh lenge toh unhi ke saamne se rickshaw chala ke jayenge (Once we learn, we will zoom past them in our e-rickshaws.”

Every afternoon for the past four days, the women have been walking to a small parking lot near the lake, where Jamshed Khan from Mamta Welfare Society trains the women for two hours.

With just two e-rickshaws and 50-odd women, Khan says his plan is simple — to let everyone get a chance to drive once. Most of the women try and leave their homes early for a “good” chance to practice. Squabbles and fights break out frequently whenever someone presses for “one more round”. Children impatiently wait for mothers to get off the rickshaw and tend to them, even as the women try to go for one last drive.

The initiative by the Nidhi Foundation aims to make the 151 women self-reliant by not just giving them interest-free loans on the e-rickshaws, but also giving them training in financial literacy, self-defence and digital literacy.

The women, all of whom will get pink e-rickshaws equipped with CCTV cameras and a set of uniforms, will have to pay Rs 200 per day for two years.

“Most of them work as domestic help or as construction workers, or just stay at home. The idea was to tailor the government scheme and involve the women and make something that didn’t require too much working capital, but which could dramatically change their lives,” says Abhijeet Sinha from the foundation.

Apart from their driving licences, the women will also get Jan Dhan Bachat accounts and become beneficiaries under the Atal Pension Yojana.

Nobody is too young or too old to join in. Maya, easily above 50 and a grandmother, says, “My son asked me why I had to do all this. He said he can take care of me. I told him that I wanted to learn this. It was worth fighting for; the first time I sat on the e-rickshaw, I was scared. But after the first ride, the fear just vanished. I have never experienced anything like this before”.

For others like Mamta from Nehru Camp, it is a sense of independence that made her enroll for the scheme.

“I work as a domestic help and earn about Rs 6,000 to Rs 7,000 a month. But there is no respect in the job. I can’t take a leave without being made to feel guilty about it. If I fall sick, my employers deduct my day’s salary. That is why I am learning to drive — I can do things in my own time and on my own terms, and make a respectable amount of money too,” she says.