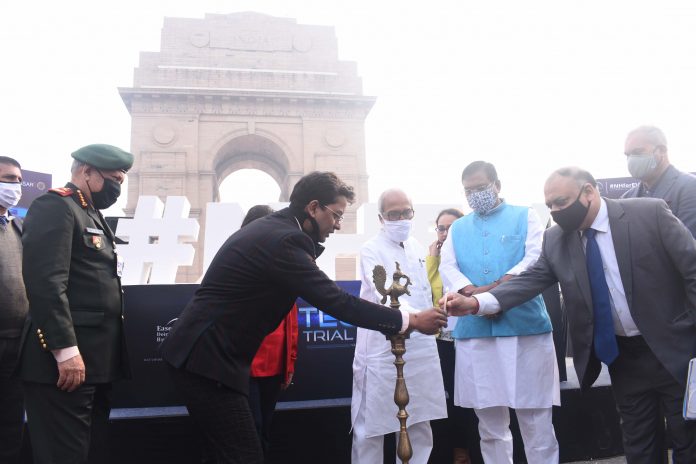 Sensing the raising air-pollution levels of Delhi and need of an urgent attention to encourage electric mobility adoption which necessarily require upgrading and converting highways into E-highways, this Tech-Trial Run of an advanced PPP model Annuity Hybrid E-Mobility (AHEM) prototype was supported by various government and private entities to accelerate this conversion on faster pace so that more people in Delhi who doesn’t buy EVs today because of cost and chargers are limited to cities, can buy electric vehicles and can also use EVs in these commercial fleets without buying them.

Theme of this EV assembly at India Gate was RED ALERT to combat with pollution on war level and make these e-highways operational in minimum possible time, and to support this noble cause the theme-based infantry assembly of these TECH-trial Run components was symbolically graced by Gen. Vipin Rawat, Chief of Defence Staff at India Gate and Hon’ble Raksha Rajya Mantri Shri Shripad Naik through an encouragement message and best wishes for its success.

The enthusiasm beat was kept forth by esteemed guest of honour Smt. Meenakshi Lekhi, MP- New Delhi, who came by riding an electric cycle to join this assembly at India Gate and emphasized the need of developing alternative sources to reduce dependency on Li-ion import for Indian EVs. She also unveiled the organizer exhibit of National Highway for Electric Vehicle (NHEV) program and learned how the team of Advance Services for Social and Administrative Reforms (ASSAR) addressed major e-mobility challenges by developing Annuity Hybrid E-Mobility (AHEM) model for smooth and speedy conversion of highways into E-highways.

These under TECH-Trial E-highways are tomorrow’s backbone skeleton of the nation and their infrastructural contribution in clean surface transport and adoption of emerging technology was evaluated by Shri Faggan Singh Kulaste, Minister of State for Steel, Govt of India from the viability point of view for Steel PSUs to own at least one station as a catalyst for change as its currently proposed to be owned by power & petroleum
PSUs only on preferential first right of refusal. He came in an Electric Car from TATA Motors operated by BluSmart Electric Fleet and shown his interest in upcoming results of the TECH-Trial Run so that it can be taken forward….

Chief Guest of the program who made this lock-down halted trail-run possible to resume in the same year with his support, Shri. Pratap Chandra Sarangi, Minister of State – MSME, Govt of India; drove electric bike from Udyog Bhawan to India Gate straight on Rajpath opening more than 12 barricades symbolically for electric mobility with help of Delhi Police to symbolically inspired ambassadors of change to take this change ahead for 210 kilometres with this TECH-Trial Run on Yamuna Expressway till Agra. He came from an electric bike, evaluated chargers, solar station solutions, examined electric bus cars, unveiled EXICOM Chargers as an integral component and understood the road travelled in the E-mobility by one of the ‘Ambassador of Change’ organization Energy Efficiency Services Limited (EESL) an entity promoted by Ministry of Power, Government of India as a Joint Venture of four reputed public- sector undertakings NTPC Limited, Power Finance Corporation Limited, REC Limited and POWERGRID Corporation of India Limited.

The NHEV TECH-Trial Run assembly successfully demonstrated all its components to deliver its groundbreaking deliveries for people who will travel from Delhi to Agra in Electric vehicles on this new E-Highway.30 Minutes, 30% Percent and 3 years are three vital takeaways of NHEV project. Because every electric vehicle will get automated technical back up on this e-highway in 30 minutes if breakdown, fleet operators will get vehicles in 30% lesser price due to battery subscription and within 3 years CAPEX spent on civil and electric infra of charging stations will reach its breakeven with their 30% utilization.

The assembly concluded with virtual felicitation of these ‘Ambassadors of Change’ and Tech Trial Run started with the heartfelt patriotism of our National Anthem with a promise from the Project Director of NHEV that the TECH-Trial Run will conclude with same tune of our National Anthem in the evening at Agra Uttar Pradesh at completion of this 210Km trial.

‘We would complete this trial run in record time today by evening 5.30 pm at Agra and will also open this 30 days Tech-Trial Run for all type of vehicles to test their highway capabilities and validate frequency, positioning and technical capabilities of the proposed charging stations on Yamuna Express way. After completion this TECH-Trial Run and commissioning these stations, we aim to register it into Guinness World Records of World’s longest E-Highway with an unmatched automated technical Road Side Assistance (RSA) guarantee within 30 minutes says Abhijeet Sinha, Project Director of NHEV, while his departure from assembly to Flag-Off venue at Greater Noida.

The EV Convoy of many electric cars and an Electric Bus moving from India Gate straight towards Rashtrapati Bhawan on Rajpath opening all barriers of obstacles to take its final turn from Udyog Bhawan was a mesmerizing view not only for attendees, participants but also for passersby to witness this historical moment and advancement towards sustainability, clean transport and development. This 30 days Tech Trial Run would conclude on the birth anniversary of Late Bharat Ratna Shri Atal Bihari Vajpayee in a valedictory ceremony at New Delhi.