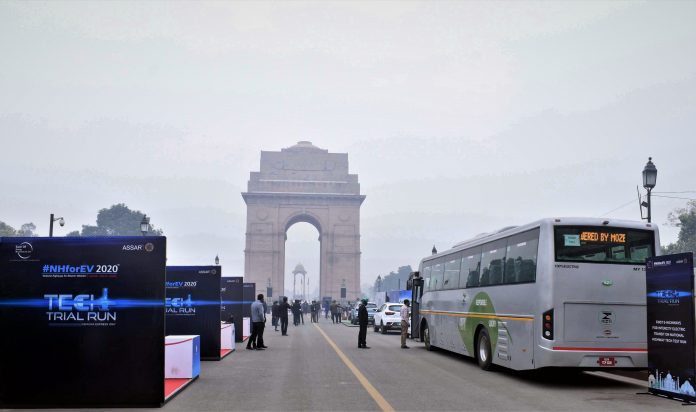 Looking at the raising air-pollution levels of Delhi as an urgent solutions, these e-highways were to made operational in minimum possible time, with various companies from all over the world participating in the NHEV. The trial run scheduled by Ease of Doing Business aimed to test the technical viability of Yamuna Expressway for public and private EV transit. The trial was focused on the frequency and compatibility of charging infra as well as roadside assistance.
With vast implications such as lowering pollution levels, enhancing energy security with improved balance-of-trade & utilization levels, meeting global climate-change commitments, relative abundance of exploitable renewable energy resources and high availability of skilled manpower and technology in manufacturing and IT software, India organised it’s biggest trial to shift its gears in the transition to clean surface transport.

However on the occasion of such a vast advancement with great global importance, a new controversy was sparked regarding some confusion and mis-information due to a mistaken unauthorised press-release made by MG Motors; one of the participating manufacturing company; that got wrongly conveyed as the organiser of the program with the esteemed dignitaries. Which was later attempted by the press to portray as if it were a private car launch; while the actual organisers (ASSAR) were occupied in the concurrent Trial run at Yamuna Expressway Jewar’s Model Charging Stations stop. However, MG motors immediately issued a clarificatory tweet dismissing the above.

Yet the press continued to flame the controversy. With such baseless misinformation regarding the program, many news agencies began to question the very presence of our CDS of the nation Gen Bipin Rawat and the member of parliament, Meenakshi Lekhi positing them as part of the promotional event for the launch of MG motor car in India, which is a classic case of fake news peddling. “Indian hypocrisy is at its finest!” Due to present scenario of tension on india china border and war like situations in galwan many news channels began to pick tweets against CDS and other Diginities for being part of the Chinese company’s vehicle inauguration as it disrespected and provoked the very nationalist sentiment of the citizens.

Among such vast assumptions and false accusations the president of MG motors Mr. Rajeev Chaba himself apologetically clarified over Twitter regarding this misleading news and tweeted that they were merely a part of the event like other big companies through his official Twitter account. “Proud to be part of it- only EV Car for this drive from Delhi to Agra.”

Talking about the controversy Ease of Doing Business – National Program Director from ASSAR Mr. Abhijeet Sinha said that “ We all stood up for the National Anthem at India gate and being Project Director of NHEV. I myself went to Agra with EV convoy to make sure that the TECH-Trial Run ends with the National Anthem at MGs Agra charge point as per our national protocol. It was a technical program not a MG car promotional event that unfortunately it became in media.”

He further added that “ General Rawat was to accompany the Raksha Rajya Mantri Shri Shripad Naik who couldn’t come since his flight was missed at GoA airport but Gen Rawat came to the program sensing the urgency in Delhi and because theme of this EV assembly at India Gate was RED ALERT warrants a combat with pollution on war level and to support this noble cause the theme-based infantry assembly of these TECH-trial Run components was symbolically graced by him; didn’t flagged off or unveiled any product or car.”