India is 4th largest automobile manufacturing country on globe but E-mobility during its early years of inception was not a viable business option in India. Although the then central government did introduce the ‘National Electric Mobility Mission Plan 2020’ as early as in the 2011 Union Budget, but the whole theory of E-mobility banked on ‘subsidy’, which yet could not be a viable business option for growth.

In 2014, NDA government came to power at the centre with the core aim of Reform, Perform and Transform the ways government function. However, due to traditional procurement models and emerging tech challenges, they also could not pick the much needed impetus from the slow E-mobility adoption between 2014 and 2018. Early in 2018 the Ease of Doing Business (EoDB) division of a private entity supported by government ASSAR stepped in to take this journey of E-mobility forward with actual Ease of Doing Business and a turnaround came with the introduction of the Annuity Hybrid E-Mobility (AHEM) for funding E-Highways.

EV Users had a three-fold problem while shifting to E-mobility. Firstly, they wanted the vehicle to be in their price range, which means they were not willing to spend more than a lakh or two over and above their existing vehicle price. If a user is buying a car which Rs 18 lakh budget, he is willing to spend maximum Rs. 22 lakh on E-car and not beyond, it make EVs upfront high cost a barrier for adoption. 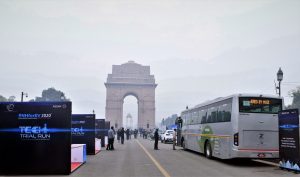 The issue of the price of E-vehicle was tackled by separating the cost of E-vehicle and Battery on subscription. Manufacturer and Buyers of the E-vehicle were allowed by government to buy and sale vehicle and battery separately. Ease of Doing Business in buying EVs was initially introduced in National Highway for Electric Vehicle program for fleet operators with vehicle price excluding the cost of the battery. Batteries are to be purchased, owned, maintained and operated by ‘Battery Operator’ on subscription lease. It reduced upfront price of Electric Vehicle upto 30% on purchase for fleet operators. They can easily pay the cost of battery separately from their monthly cash-flow in premiums with other components of Subscription billing like Monthly Charge and Road Side Assistance (RSA) availed at breakdown during the month.

The second popular demands of the users & fleet-operator was to know what would happen to our EV if shutdown shut down out of cities on a highway. Whom they should call for help, battery OEM or EV manufacturer who made tall claims? Or the governments that offered subsidy and assured infrastructure? Or Charging Station operators but are they readily available? Users wanted Road Side Assistance (RSA) service to be readily available in case of a breakdown of their vehicle. They didn’t want to wait hours for their vehicle to be repaired. Ease of Doing Business prototyped NHEV with auxiliary emerging TECH of connected mobility to ensure that RSA reaches breakdown vehicle within 30 minutes and did its first Tech Trial Run between Delhi and Agra in Dec 2020 to check its success rate. 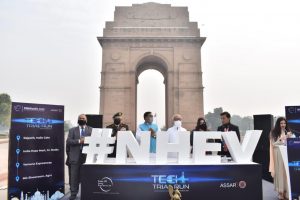 The third and the most significant demand was the charging of batteries. A passenger travelling from Delhi to Agra and Jaipur will be in no mood to wait for 2-3 hours for their battery to be recharged. This issue was also handled by programmed and premeditated fleets that automatically shift passenger in a charged vehicle at stations during their tea-break. Then plug-in discharged vehicle at E-stations to be ready for use in next 60 minutes. It made the charging / swapping exercise only 5 minutes affair that too undisclosed to passengers.

But the bigger problem was with the traditional procurement methods adopted by the previous government for incentivizing, buying EVs and building charging infrastructure. There was a need-based procurement model in practice which procure one item at a time at a time. Tenders floated with presumptive specifications without pilots and the lowest bidders used to get the contract regardless of low adoptability of their technology just because they have skills of winning tenders. Later when E-mobility adoption poses new demands and other requirements, another tender was floated. So, the whole process was quite cumbersome as the opening of one tender and its closing took approximately 8-10 months. If this exercise happened four times, it would roughly take four years to introduce an e-mobility ecosystem on road.

E-mobility witnessed turning point in 2018 when the Annuity Hybrid E-Mobility (AHEM) was introduced by Ease of Doing Business as new financing model to fund E-Highways initially. Model was easy yet strong enough to do mass and multi-layer procurements in one go and under AHEM the ‘quality and delivery’ to the user of the product was given prominence over pricing. The most important criterion for selecting a product became as to how far the product fits into the highway user’s requirement. Keeping a tight tab on breakeven, price of the product was pushed to secondary in prototype.